Last week, I posted about the value of retelling or adapting classic stories. For this post, I want to give an example – with helpful step by step instructions! – of how one might take a classic story and rework it in a different context. Not only is it fun, it is also a useful writing exercise for any writer who is trying to develop their skill at creating worlds and characters.

The first step (step one a) is to lay out the main character and plot events of the story you’re going to tell or rework. Let’s take the Biblical story of Joseph as an example.

According to Genesis, Joseph was the 11th of 12 brothers, but the eldest of the two sons born to his father’s favorite wife. For this reason, Joseph was his father’s favorite. In addition, from the time he was young, Joseph had dreams that proved to come true. He was rash, impetuous, and arrogant, and told his brothers that according to his dreams, they would all bow to him. Eventually, his brothers grew so furious at him that they sold him to a passing group of slavers and told his father that he was killed by a wild animal. Joseph was sold as a slave in Egypt to a high official, and through his skills (and blessing from God) became the overseer of his household. He was falsely accused by the official’s wife of improper conduct and spent the next number of years in prison. Finally, after hearing of his powers of interpreting dreams, Pharaoh sent for him to interpret a strange dream that boded ill for Egypt. Joseph, through God’s power, was able to interpret the dream and was made second in command of all Egypt. Through this position, he prepared Egypt for a coming famine. When the famine hit, everyone had to come to Egypt for food – including Joseph’s brothers. Joseph tested his brothers to see if they had changed, and when it turned out they had, he revealed himself to them and forgave them. In the end, Joseph’s entire family moved to Egypt, where they prospered for as long as Joseph was alive.

Step one b is to figure out which of these elements we want to keep for retelling the story. For simplicity’s sake, let’s keep the character of Joseph the same as in the original story. We’ll also make him a favored younger son, though we don’t have to keep all eleven of his brothers. The themes of filial jealousy, revenge, repentance, and ultimate forgiveness will be kept, as will Joseph’s sudden shock of being ripped away from his family, his humiliation and degradation, and his ultimate maturing during suffering, and his being put in a position of power due to the ability that got him in trouble as a boy. We’ll also keep his confrontation with his brothers and the happy ending.

Step two a is to decide the new setting for this story. Let’s do two of them for fun. One will be a fantasy, set in my magical kingdom of Cadaeren (where The Quest of the Unaligned takes place). The other will be set in a pseudo-historical fiction/generic “pirates” setting. Because pirates are awesome.

Step two b is to determine how the main plot and character points will be different from the original story, given the setting we’ve chosen. In Cadaeren, Joseph can still be a herdsman’s son, as in the original story, but his dreams and unique powers should be based on the magic of this world. We’ll have him be an aesh. Instead of going to Egypt, the sophisticated land of pyramid-builders who looked down on their herdsmen neighbors, Joseph will go to Tonzimmel, the sophisticated city of technology users who look down on Cadaerians as being superstitious peasants. Instead of becoming right-hand man to Pharaoh, Joseph will end up on the Governing Board of Tonzimmel. Finally, instead of a famine driving Joseph’s brothers to Egypt, a mysterious illness will have struck Cadaeren, including its magical healers. The only place that will have medicine is Tonzimmel – and Joseph will be in charge of imports and exports.

In the pirate story, Joseph will be the youngest son of a wealthy fisherman. His father is a widower twice over, and loves Joseph best of his four sons, because he’s the only thing that reminds his father of his beloved second wife. In addition, when Joseph was baptized into the Catholic church as an infant, the priest informed his father that God had revealed that the boy was specially blessed for a special purpose. That blessing will be the source of his insight. 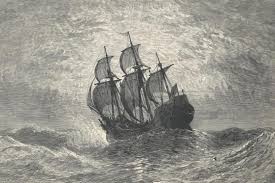 In this version, Joseph and his brothers will be out fishing when a pirate ship casts its sights on them. The brothers will bargain with the captain, offering him Joseph – and his God-given blessings and insights – in exchange for their lives. This captain will play the roles of both the slavers and Potipher, as he takes Joseph on board his crew. Instead of being thrown in prison after being falsely accused, Joseph will be forced to walk the plank, then be found by a different ship and made a galley slave of the most feared pirate on the seas. He will eventually become this captain’s first officer. As such, he will be in a position of power to argue for keeping and hoarding the foodstuffs that they capture rather than selling it: from his dreams, he knows that there’s a famine coming. He will be reunited with his brothers when his captain’s ship boards theirs, and they are forced to bargain with Joseph for their lives. In the end, faced with the famine that has hit the mainland, they and their father will move to the pirates’ private island, where they will be under Joseph’s protection and well cared for. The pirates turn to selling the food that they have kept stored for years, and become wealthy beyond their wildest imaginings, and the people of the land don’t die from starvation.

Step three is to then figure out what the plot of your story – in addition to the elements of the story you’re retelling – is actually going to be. This is where you can have fun playing with the different parts of your novel. For instance, the Cadaeren story might feature a ring of corrupt officials in Tonzimmel, the existence of which Joseph discovers over time and has to take down before he can be named to Tonzimmel’s Governing Board. Or the pirate story might be full of naval battles and treasure hunts, through which Joseph proves his courage, insight, and leadership skills to his captain. Whatever you choose, make sure the plot reflects who your characters are, and what the burning needs are that drive them. Cadaerian Joseph will be driven by an urge to uncover the truth, gain knowledge, and prove that he’s right – because he’s an aesh, and that’s what aeshes do. Pirate Joseph might at first be driven by an urge to gain enough wealth and prestige so that he can purchase a royal pardon and retire back to his home and elderly father, only to slowly accept a higher purpose of saving the lives of the pirates, their town, and everyone on the mainland who would otherwise die of starvation.

This is why retellings are such fun: with good writing and a touch of creativity, you can come up with a thousand different plots that will delight readers by both giving them what they expect, and then also tweaking their expectations to keep them turning the pages to find out what happens next.

What classic story would you love to read as a retelling? Leave a comment with your thoughts!

1 thought on “Savvy Saturday – How to Retell a Story”